RBI Monetary Policy: The Rate Hike Cycle Has Begun. Where Will It Stop?

India’s Monetary Policy Committee surprised the financial markets as it hiked the benchmark repo rate for the first time in four years to fight inflation. But now that the cycle has turned, where will it peak? The repo rate was raised by 40 basis points to 4.4%. Economists estimate the terminal repo rate in the current cycle to be anywhere between 5.5% and upwards of 6%. That comes as retail inflation exceeded the MPC’s upper target of 6% for the third straight month in March. CPI inflation is projected to remain elevated over the next couple of months, with the April reading likely to come in at 7.3-7.4%, according to a research note by Emkay Global. For the full year, economists expect the RBI to revise its inflation forecast of 5.7% higher.

According to Nomura, inflation is likely to average 6.6% year-on-year in FY23 due to costlier fuel, pass-through of higher commodity prices, upside risks to food prices, economy reopening pressures and elevated inflationary expectations.

Where Will Rates Peak In This Cycle? Economist Estimates
First Stop: Repo Rate Of 5.15%
Soumya Kanti Ghosh, group chief economic advisor at State Bank of India, estimates that the repo rate will move back to what it was before the onset of the pandemic. With the current hike of 40 basis points, it seems the rate cycle has made a U-turn from the steep cuts seen in early 2020 and the RBI would continue to increase the rates and may reach the pre-pandemic level of 5.15% by end-March 2023, Ghosh said.

A Return To Neutral
The terminal policy rate may be around or a tad higher than 5.5%, with the RBI now showing its intent to keep real rates neutral or above, Madhavi Arora, lead economist at Emkay, said in a note. “In keeping with the RBI governor’s interpretation of ‘withdrawal of accommodation’, we may safely conclude that the intention is to return the repo rate to the pre-Covid level of 5.15% ” Arora said. Thus, Emkay expects the possibility of another 75 basis points of rate hikes in FY23, totaling 115 basis points, to be front-loaded over the next three meetings between June and October 2022. Pranjul Bhandari, chief economist at HSBC, too, said the terminal repo rate in this cycle will be 5.5% by mid-2023. This will leave the repo rate somewhat higher than 5.15%, where it was on the eve of the pandemic, she said. “Our FY24 CPI inflation forecast is 5.5%, implying that by mid-2023 India will be out of the negative real rates territory.” The RBI’s strategy could well be sharp rate hikes initially which will eventually allow the terminal repo rate to remain relatively low and supportive of medium-term growth, she said.

Higher Inflation, Higher Interest Rates
The MPC may be planning to quickly revert to the benchmark policy rate of 5.15% or 5.25% that was prevailing before the pandemic, Prassana A, chief economist at ICICI Securities Primary Dealership, said in a research note. It’s likely the RBI and the committee may wish to hit that target by the October policy meet, which is when the RBI governor will need to formally write an explanatory letter to the government to explain the breach of inflation target over three successive quarters. That would imply a cumulative 75-85-basis-point hike across the June, August and October meetings.

But, repo rate at 5.15% or 5.25% is not an endpoint, economists at ICICI Securities Primary Dealership said. With inflation poised to exceed an average of 6.5% over this year, real policy rates will still be deeply negative. “That portends more tightening in the subsequent meetings after October even if the committee may choose to skip a meeting,” the report said. “Given that inflation projections are set to be revised higher, we now expect the MPC to hike the repo rate to 6% by June 2023.”

What Does The Taylor Rule Suggest?
“The repo rate at 4.4% is still too low and substantial policy catch-up still lies ahead, based on our estimates using the Taylor rule,” Sonal Varma and Aurodeep Nandi, India economists at Nomura, said. The Taylor rule is an equation, used as a rule of thumb, to determine terminal rate on the basis of the real interest rate, the difference between the current and targeted level of inflation and the output gap in the economy. “We are raising our terminal policy repo rate forecast slightly to 6.25% from 6% earlier,” they said in a research note on Wednesday. Varma and Nandi have flagged the risk of more frontloaded hikes, including 50-basis-point rate hikes at one of the next few MPC meetings, in view of the expected rise in inflation and because monetary policy works with long lags. Now, they expect the RBI to hike rates by 35 basis points in June and 50 basis points in August, followed by 25 basis points at each of the subsequent policy meetings until April 2023. 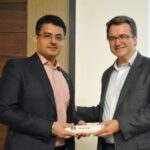 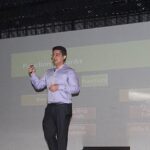 Guest Lecture on Banking & Finance by our Founder, CEO

RBI Monetary Policy: The Rate Hike Cycle Has Begun. Where Will It Stop?